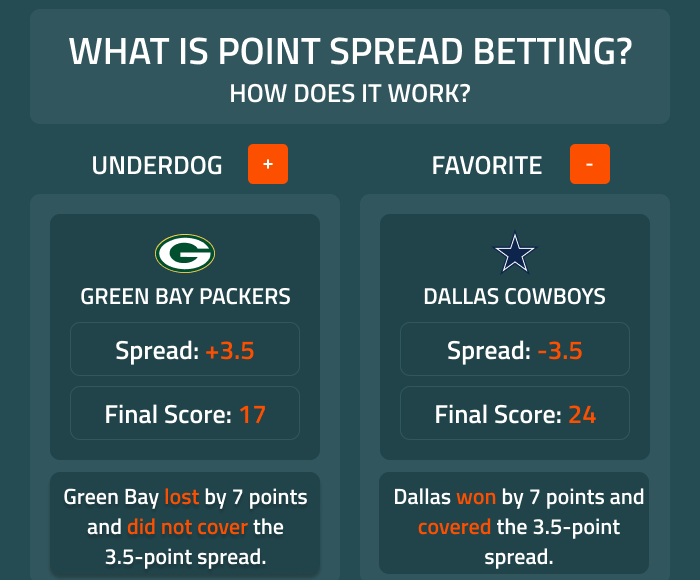 When it comes to betting on sports it is very common to hear someone say “what is the spread for the game”. While a point spread is a very easy concept to understand, it is far more complicated than that when it comes to using this handicapping device to actually bet on a game.

A point spread by definition is the amount of points a favorite needs as a margin of victory against an underdog to win a bet. It is most commonly used in sports such as football and basketball as the primary way to wager on a game. For example, if the Dallas Cowboys are favored by seven points against the Washington Redskins, Dallas needs to win that game by more than a touchdown (7 points) to cover a bet against the points spread.

One common misconception is that a point spread is the expected margin of victory in a particular game. In reality, a point spread is a handicapping tool used by oddsmakers to try and balance out the betting action as even as possible on each side of a matchup. The sportbooks make their money on the 10 percent commission they charge to book a bet, which is also known as the vig (vigorish) or juice on a wager. Their ultimate goal is to have the same amount of money bet on each team in a football of basketball game so all their profit comes from collecting the vig.

This is why you will see point spreads go up or down after first being released. Going back to the Cowboys vs. Redskins game, if the early money all goes towards Dallas as a seven-point favorite, the books will probably move that point spread to 7.5 to try and attract some betting action on Washington.

The betting public in general is prone to betting on favorites regardless of these point spread movements which helps explain why most sportsbooks do extremely well each football and basketball season. If you already know where most of the money is going to be bet in a particular matchup, you can then manipulate the point spread in your favor. While winning percentages can vary a bit from one season to the next, most times it is a 50/50 proposition that the underdog is going to cover just as much as a favorite.

When it comes to the sport of football, some point spreads mean more than others given the different scoring methods in this sport. A field goal is worth three points and a touchdown with a one-point extra point is worth seven points. Anytime you have a point spread of three or seven points or any multiple of the two you have to be a bit more wary of line movements when it comes to winning a bet.

Millions of dollars are won (and lost) every week over a half-point one way or the other when the numbers three and seven are in play. Another thing to keep in mind when it comes to point spreads is that all sportsbooks are not created equal. Once the oddsmakers release the opening spread it will be bet up and down at each individual book. This may cause one book to move the spread one way, while a different book may hold the line on that opening spread. This works in the favor of the savvy sports bettor who has the patience to shop their point spreads from one book to another. As mentioned above, a half point here and there can make all the difference in the world.